The exhibition is part of the Second Great International Chess Festival which takes place in University City.

Mexico City. – As part of the Second Great International Chess Festival , was inaugurated on Monday in Ciudad Universitaria the exhibition ” Monumental Horses “, consisting of 30 pieces of fiberglass, 90 inches in diameter and 2.5 meters high.

During the inauguration, the rector Jose Narro Robles said the results were surprising in the first version of the chess festival a couple of years ago.

“Thousands and thousands of fans shared experience, joined the games and cultural activities, while the website had five million visitors from many countries on all continents,” he said.

On the esplanade Javier Barros Sierra de la Torre Rectory , adding that with the event, which is mixture of cultural, symbolic, artistic and chess, disclosed the beginning of this year’s activities.

The National Autonomous University of Mexico ( UNAM ) embarks on a new adventure and meets the commitment to organize the second edition of the festival of chess , as well as to give new dimensions, he said.

He emphasized that chess is a hobby, a science, a great sport and an intellectual mechanism that calls and attracts millions of people worldwide.

The Leading Academic reported that horses , decorated by artists and artisans, symbolize the universality of the game-science.

Of all the works, 10 are located on the esplanade Javier Barros Sierra and the rest will be on display at the entrance to the faculties, the University Cultural Center and in the Inside Track University.

He noted that one of the main attractions of the Second World Festival , to be held from 16 to 25 November in various locations of this institution, will be the presentation of the Norwegian Magnus Carlsen.

On Saturday 24 November, the European player who is currently in first place in the world rank, staged encounter “Magnus vs. the World” in which face anyone who wants to measure up both in a packed auditorium, and through the internet.

‘Monumental Horses’ on the esplanade of Rectory 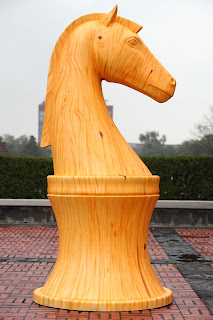 The history of mankind is also the history of the horse, one of the most beautiful animals of creation and it certainly has paid more and better services to man. Dario said that “It is inconceivable to Alexander the Great without” Bucephalus “the Cid, without” Babieca “Santiago can be no standing, no Quijote” Rocinante “nor poet without” Pegasus “.
Symbol of strength and beauty, in the recreation of the world that is the chess board, the horse plays a central role. In the Middle Ages chivalry was what governed the relationship between horse and man, among other things. In chess, the knight is the piece that is placed next to the tower. Your initial in Spanish and English is C N (knight, “horse / rider ‘). It is the only piece that jumps, ie, it can go from start box to the destination without being interposed to prevent any part, or the contrary neither own. 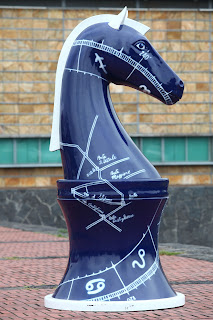 Man has always done the infinite space of the sky a constant question. The unfathomable mysteries of the night gave rise to myths and legends, but also to a science: astronomy. It is considered the beginning of it in the ancient Babylon by his priests. The priests of ancient Egypt also singular emphasis on observing the sky, being reflected in the so-called astronomical ceilings, drawn in many tombs in the Valley of the Kings.
Unlike most scientists, astronomers can not directly manipulate the objects they study, and should make use of detailed observations for their discoveries. This beautiful piece embodies the sky and its stars, open vertices thousands of responses, the game plays like science. 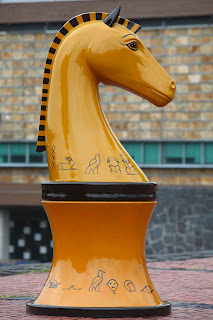 Ancient Egyptian history covers a period of almost 6000 years. It was the most ancient civilization that has existed. History tells us that the war chariot, along with the horse was introduced into Egypt during the rule of the Hyksos in the sixteenth century. C.
The emergence of a professional army in Egypt is closely linked with its military deployment and the emergence of this new type of weapon: the chariot. This is the first weapon collective feature of developed armies. Have reached us of the art of ancient Egypt and Assyria numerous representations of chariots you can appreciate the richness of their ornaments. That cosmogony where animals are sacred, inspired this piece that recalls the beauty of those horses who wrestled countless battles, as they face the chess pieces on the board. 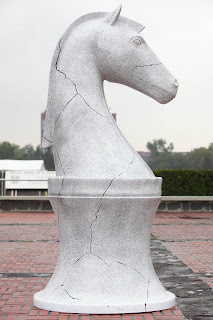 Granite is a plutonic rock (igneous rock and ancestral, born in the depths of the earth). Resistant, stronger than marble, corrosion and supports compression. Is a rock capable of being cut and polished.
Granite is the most abundant rock in the earth’s crust. Companion of mankind since ancient times, has been used in the construction and protected from the weather man. The camera farónica the Giza pyramid is carved in granite and many mausoleums and large buildings are of this material. This beautiful granite horse shows the beauty and strength of this rock, as are relentless victory and defeat on the chessboard. 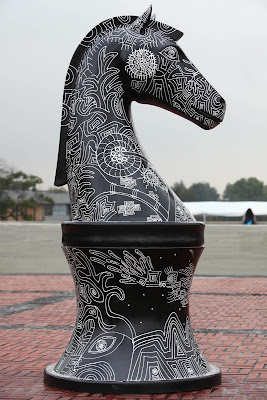 The term Huichol is the name given to the Spanish Wixarikas. Geography stunning Sierra Madre Occidental, in Jalisco, Nayarit, Durango and Zacatecas is the blood of our ancestors forged desert wind that figure cosmogony in harmony and respect for our mother earth.
This beautiful chess piece recreates Huichol reasons. In Wixarika cosmogonic mythology is the idea that, in the beginning of time, all things that exist, plants, animals and humans, were an undifferentiated unity, in which all were connected, sharing the same language. On a white board and black also speak a unique language. 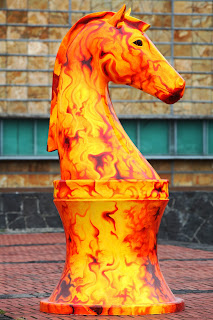 In the popular imagination, a horse on fire is a ghost, which usually appears in the lonely roads, near the crops. A horse with its tail of fire cross straight and stop just before an election, the reason is a mystery, but not the end all of these stories are fatal. A chiaroscuro painting in the collective unconscious of a duality be as powerful and beautiful as is the horse. An animal can symbolize light and darkness.
Myths about the horses know several veins, literally, have not been outside feathers of various writers. Leopoldo Lugones, for example, has a story “The Horses of Abdera”, which addresses the revolt of the Equidae and the arrival of Hercules to save the city. This raises chess piece that duality, but also the fire of knowledge that science has the game in every contention. 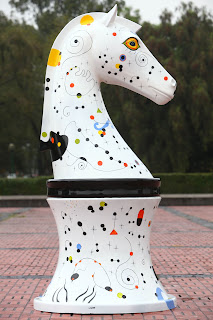 Ferrà i Joan Miró (Barcelona, ??April 20, 1893 – Palma de Mallorca, December 25, 1983) painter, sculptor, engraver and ceramist Spanish, considered one of the leading representatives of surrealism. His painting is full of dream worlds, imaginative games, figures whose position changes the schema of the table, in fact it has been ranked as the “most surreal of all.”
A Mediterranean surrealism, with strong colors and striking in the cosmos that are a source of inspiration. So, in 1940 he painted his “constellations”. A series of 23 small paintings full of pictograms and symbols naturalists. This was based on the sky of Normandy, a French village called Varengeville. This chess piece is an endearing tribute to that sky, that inspired the artist. 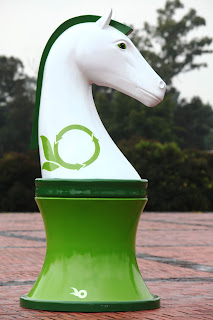 This horse refers to recycling which is a physical, chemical or mechanical comprising subjecting a material or a product already used (waste), a cycle of total or partial treatment to obtain a raw material or a new product. Also known as obtaining raw materials from waste, introducing them back into the cycle of life and occurs at the prospect of depletion of natural resources and to effectively remove waste from humans do not need.
A new culture of production of products used to care for the environment. 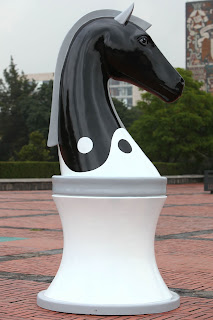 Chess makes a duality, day and night, opposing forces are present in the science game. The yin and yang of Taoism are two concepts that relate to the duality of everything in the universe. Describe the two fundamental forces opposite and complementary, which are found in all things. Yin is the female principle, earth, darkness, passivity and absorption. The yang is the masculine principle, the sky, the light, activity and penetration. That is, the yin and yang are opposing yet interdependent, and can be transformed into its opposite.
It can also be said that every being, object or thought has a complement of that depends for its existence and that in turn exists within himself. This piece plasma itself contraries present, while other co-existing in the same space. 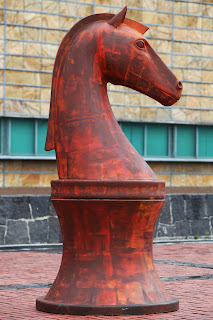 Solid, liquid or gaseous oxide – binary compound containing one or more oxygen atoms and other elements-implies, above all, the passage of time on the metal, is an extraordinary macula furrows and chiaroscuro whose sequences are drawn out moments, turned into decades, decades and centuries.
Air and Weather, made of earth, water, fire, salts, minerals, every particle of the earth’s crust and multiplies joins an oxide. So the statues till this piece its patina and where a spirited horse has been running chess games, is also the faithful mirror of a time that was metal in constant transformation.
by Aristeo Pantoja http://eljuglarac.blogspot.com/

One Reply to “Narro Robles opens in CU “Monumental Horses””